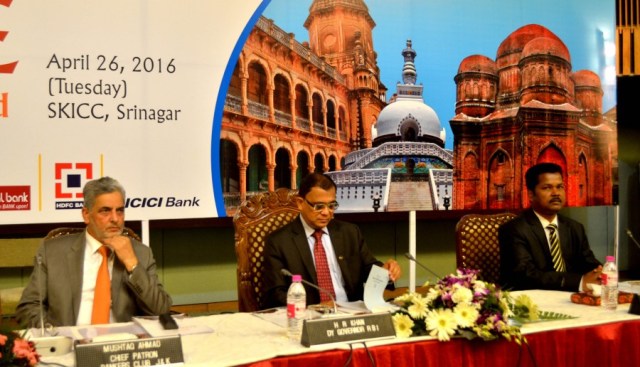 H R Khan, Deputy Governor RBI who presided over the maiden event by J&K’s Bankers Club emphasized swift improvement in the investment-saving-lending cycle rather than getting into random financial inclusion. He flagged the challenges saying banking sector must have an early marriage with the cell phone to reduce costs, improve penetration and make delivery faster.

“Financial inclusion is a target oriented scheme, it is all about numbers,” Khan said in his long lecture on financial inclusion. “Of the 20 crore (bank) accounts opened under (Prime Minister’s) Jan-Dhan, mostly are dormant and unviable.”

Khan said even the Direct Benefit Transfer (DBT) that helps the government transfer benefits under various schemes directly to the beneficiary, may not make them viable. “For any account to be viable, it has to have Rs 3000 deposit in it at any point of time,” Khan said, insisting that there has to be an effort to improve people’s capacity to earn so that they save and then only the cycle of investment-saving and lending can improve and have an impact on the banking set up.

The regulator said that small accounts are big businesses only if they are serviced properly. But servicing small accounts is costly so the banks will have to use technology platforms to reduce costs. He said 12 percent of India’s GDP is in cash which in itself is a challenge as two percent of the GDP goes into the making of currency. “This explains why there should be more cashless transfers,” Khan said.

The other issue, Khan highlighted is that while the ATMs have reduced pressure on physical dispensation of cash, it has added to the costs of the operations. Every ATM transaction, Khan said, costs Rs 12. That is perhaps why the banks have reduced the number of ATM transfers per account in a month last year. “If we can switch over to mobile banking, it reduces costs substantially,” Khan said. “Every mobile transfer costs not more than Rs 1.50.” He said the banking must invest in reducing the costs of cashless transfers further to improve overall viability of the operation.

That is perhaps why, when the government was busy in implementing the Jan-Dhan Yojna, fast forwarded by the Prime Minister Narindra Modi, Bill Gates was dissatisfied. Use cell phone instead, Khan said Gates suggesting. Gates had an interaction with the regulators at the peak of Jan-Dhan launch.

Khan suggested banks should have more emphasis on mobile banking while retaining other technology platforms as options to the diverse base of their clientele. For improving connectivity, he said the banks can be assisted through a special fund that helps in VSAT connectivity.

Talking almost on the same terms, J&K Bank Chairman Mushtaq Ahmad said that Make In India campaign is not making a huge impact on ground because 35 percent of the population in India lacks any purchasing capacity. He said the campaign has to have another programme that has emphasis in Make For India.

“Given the huge imbalance between the demand and supply, the curve has to go to some reasonable shifts,” Mushtaq said. “This can only be achieved if the financial inclusion is linked to social inclusion and eventually to digital inclusion so that there is enough contribution to the economic development.”

The Banclave was the day long maiden event of the Bankers Club that was established in 2015 for promoting mutual understanding and fellowship among the banking fraternity. The 11-member entity has RBI Regional director as its head and J&K Bank chairman as its Chief Patron.

Jan-Dhan Yojan, according to A P Huta, the chief executive of the National Payment Corporation of India, has already reached 230 million (20 crore) accounts and has led to deposits of Rs 32,000 crore in the banking sector. “Before this scheme was launched 69 percent of India’s population was outside the banking system,” Hota said. By the end of March 2016, however, the overall deposits in the Jan-Dhan accounts were at Rs 35672.01 crore.

At the maiden event – ‘e-financial inclusion, a way forward’ by J&K’s Bankers Club, bank executives and regulators flagged the plenty of challenges that are visible in the gamut of opportunities IT revolution has fetched to the sector. In a changed landscape, they suggested that in next two decades banks might end up as “risk managers” as telecommunication companies may eventually takeover basic banking.