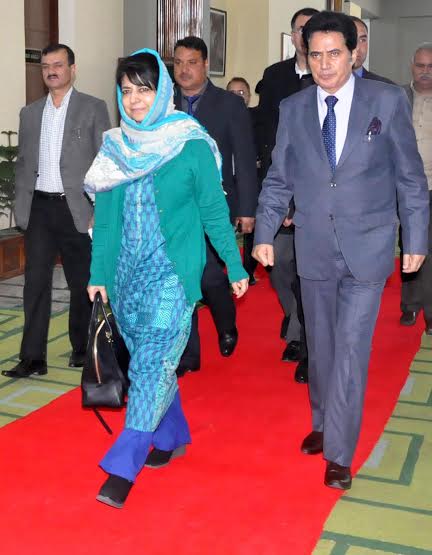 Emphasizing upon strict implementation of the rule of law, CM Mehbooba Mufti Saturday called for retrieving public spaces from encroachers and pedestrian pathways to allow better management of traffic.

She also suggested additional manpower in traffic wing of the police for smooth movement of vehicles. “Traffic management has emerged as a real challenge and drastic steps are required to get rid of the menace of frequent traffic breakdowns,” she added.

Ms Mufti was addressing a high level meeting of DCs and SSPs at SKICC here early this afternoon.

The Chief Minister highlighted the need to inculcate traffic discipline in particular related to roadside parking, use of helmets for both driver and pillion, wearing of seat-belts and barring use of cell phones while driving.

She also called for better management of street vendors so that they earn their livelihood without creating traffic hassles and problems in movement of general public.

On the construction of Jahangir Chowk-Rambagh Flyover, being executed by ERA (Economic Reconstruction Agency), the Chief Minister laid stress on completion of the project by December 31 this year.

She was also informed by the Divisional Commissioner about the closure of traffic in patches along the under-construction site, keeping in view the safety and security of the commuters.

“With active support of police, the work on the project is being monitored on a daily basis. Most of the critical works are done at night,” the Divisional Commissioner said while apprising the Chief Minister.